On yon Zoom
the ither day a wee bit friendly argie-bargie stertit up
aboot whit exactly wis
an ashet
when it wis at hame? Some wid huv it
it wis a muckle-great delft platter for servin,
say, a hail gigot o mutton roastit wi aw the trimmins
an ithers insistit, naw it wis nuthin but a
humble enamel pie-dish
sich as ye’d mibbe mak a shepherd’s pie in, or yaise
for reheatin (o aye, in a gey hoat oven!)
yesterday’s left-ower stovies or day-afore-peyday pan-haggis
(never ever cryin that skirlie, nut ata,
no here in Glesca, no in the West.)

There’s folk wouldnae gie houseroom
to this shabby aul chrome-platit slottit-spoon
wi hardly a scrap o rid or black pent left on its widden haunle, but –
it was ma mither’s – I haud it in ma haun wi ma
heid fu o mince an reminiscence, thinkin
how a clock could be a clock or a black beetle
how a sair heid is a sair heid but a sair haun is a piece
an jam — oh as long’s the slice o white-breid’s a big thick slab
an the jam rid as strawberry or rasp (the blood, the bandage) —
an I’m wonderin
— since the press in ma kitchen contains baith
a chippt bog-standard wee white pie-dish, an
thon oval antique art-nouveau losol-ware tulip mackintosh-y servan-dish
I got for a shillin in the kirk jumble-sale in the sixties —
pie-dish or platter? Which is the classic ashet?

Och, settle an argument with a friend, wee bit o
elementary detective work in a dictionar an here, it
turns oot it’s no   either/or   but   baith/and
— which is even better (for mair is ayeweys mair than less
in ma book, eh no?)

An I’ll tell ye wan thing for shair:
see ma brand-new winterdykes
I ordered online an that arrived the day fae Amazon
an might no be made o wid but raither
o clean plastic an lightweight metal
an huv an awfy well-designed an nifty wey
o foldin doon tae nuthin to store gey neatly in the loaby press
or o openin oot lik wings
and takin a loat mair claes than ma pulley ever could?
Well, I tell ye, it’ll aye be ma
winterdykes.

One of Scotland’s most celebrated writers, Liz Lochhead is a poet, playwright, translator and broadcaster. Appointed Poet Laureate for Glasgow between 2005 and 2011, she held the title of Scotland’s Makar from 2011 to 2016.

Liz began performing poetry in the 1970s and her first collection of poems Memo for Spring won a Scottish Arts Council Book Award. She has since published numerous award-winning poetry collections, including The Colour of Black and White and Dreaming Frankenstein.

Liz uses Scots in various poems and is a champion of the aural and oral tradition of poetry reading. Her work also draws frequently upon aspects of Scottish history and culture.

Liz’s writing often reveals her roots in the West Central Scots dialect area. This is a large area, encompassing Scotland’s biggest city and many of its largest towns and its dialect shows great variety from place to place. 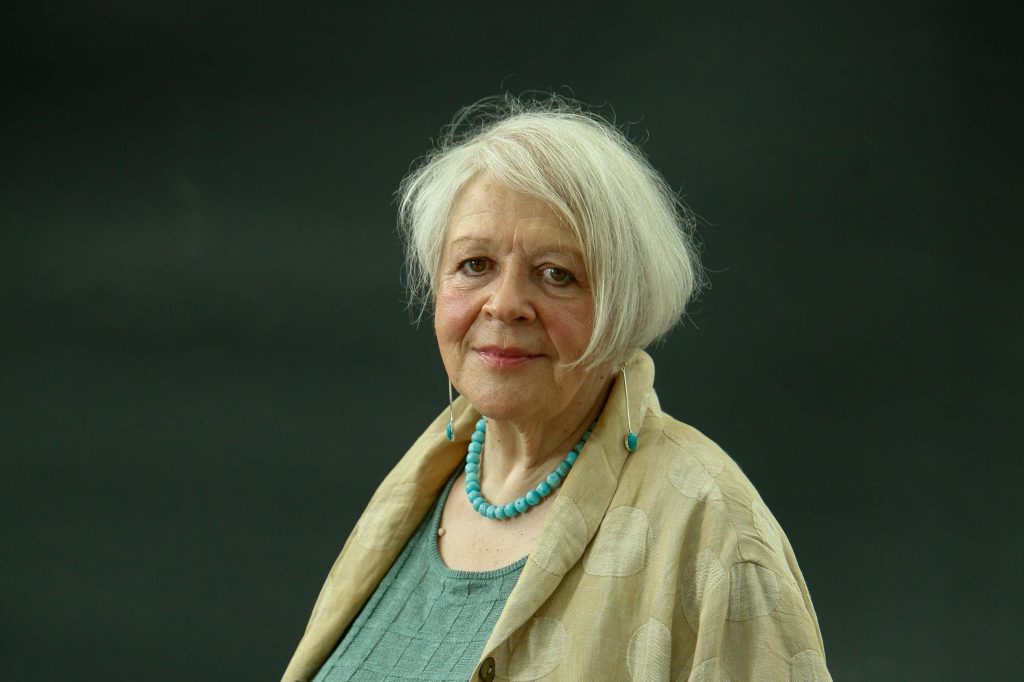