Home About Scots History of Scots to 1700

About Scots > History of Scots to 1700 > Introduction

By Caroline Macafee (CM), incorporating material by the late A J Aitken (AJA)

Certain sections of this outline history of Older Scots (OSc) are based on the work of the late A. J. Aitken. It seems appropriate to place before the dictionary user revised and updated versions of his authoritative treatments of phonology, orthographic variation, and stylistic variation, which gather together his observations over many years as senior editor of A Dictionary of the Older Scottish Tongue (DOST), rather than compose new descriptions that must inevitably be highly derivative from his work. [1]

In writing this history of Scots to 1700, I am very much aware that it can only be a summary of the state of knowledge at this moment in time. Happily, this is a particularly good moment to take stock. Several long-standing problems have been solved – the Anglo-Danish roots of Scots, the origin of the Northern Present Tense rule, and the origin of the i-digraph spellings. New work in archaeology has thrown light on the earliest period of the language, and the new method of corpus linguistics has added much detail to our picture of trends over time, especially the process of anglicisation.

A number of contributions to the subject have already benefited from the willingness of the DOST team to allow scholars access to the unpublished files. With the completion of DOST, the full range of the language now becomes available to all. This allows us to gain an understanding of OSc far superior to that enjoyed by scholars and critics who were much closer to it in time:

By the second half of the sixteenth century Scottish readers seem to have found the diction of late medieval poetry, and alliterative diction in particular, increasingly archaic and old-fashioned, and sometimes unintelligible. (Bawcutt, 1998: 12)

In contrast, the modern reader with DOST at his or her elbow comes as near as it is possible to come to a native speaker’s understanding of the auld leid.

Linguists have been reluctant to use the term Scots, possibly from a fear of seeming to introduce a nationalist bias into their work (if they are Scottish), but also in continuation of a long tradition of writing about Scots as a dialect of English, which is very persistent in the writings of scholars outside Scotland. The result is a great deal of confusion in terminology, and many an awkward circumlocution. The title of this very dictionary, the Older Scottish Tongue, has the additional drawback of being unintentionally insulting to Gaelic, as indeed is Scottish National in the title of The Scottish National Dictionary (SND).

Some of the most prominent scholars of the Scots language, including Sir James Murray, Sir William Craigie and A. J. Aitken, refrained from claiming language status for Lowland Scots. They were aware of its geographical continuity with the dialects of the north of England, of the relative lack of linguistic nationalism in the face of anglicisation, and of the limited range of uses of Scots in the modern period.

Others, including David Murison and J. Derrick McClure, have made the case for considering Scots to be a minority European language, comparing it with other languages such as Norwegian and Catalan that have successfully asserted their distinctiveness from a neighbouring language to which they are closely related, and pointing to the continuous written tradition of Scots (in contrast to non-standard dialects in England), and to its former role as a language of state documents and of the royal court. Language activists and enthusiasts for the language, aware of the criteria for language status erected by scholars (notably Stewart, 1968, and Kloss, 1967, 1978), have demonstrated that it can be used for non-literary prose, and have laboured to extend its range of expression by translation from other languages.

On 4th June 1998, the UK government announced its intention of signing the European Charter for Regional or Minority Languages, and finally did sign on 2nd March 2000, with ratification from 1st July 2001. Scots is listed under a section of the Charter which imposes no actual obligations on national governments. Nevertheless, its inclusion is de facto recognition of language status, as dialects are specifically excluded from the terms of the Charter. Furthermore, provisions have been made for some use of Scots in the Scottish Parliament. Ulster Scots is the subject of an international agreement (the Good Friday Agreement, 1998) with the Republic of Ireland. Such official recognition, limited and belated though it is, settles the question in favour of regarding Scots as a language in its own right, and it will accordingly be referred to here as a language. 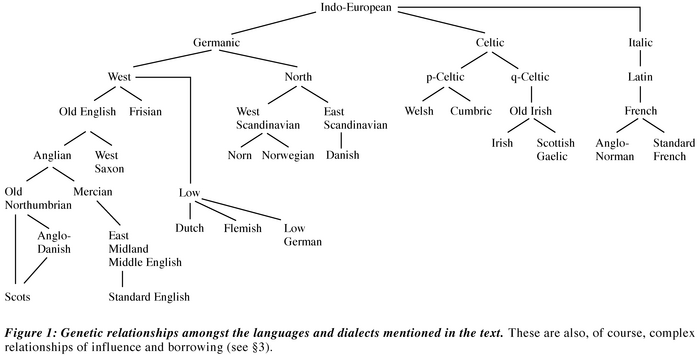 Figure 1 shows part of the family tree of Scots. It is descended from the Old Northumbrian (ONhb) dialect of Old English (OE). ONhb is itself a sub-dialect of Anglian, as is Mercian, from which descends Standard English (StE). The West Saxon (WS) dialect of OE is important historically, because most of the surviving manuscripts are in this dialect (Anglian records having suffered from the depredations of the Vikings). Some differences between Anglian and West Saxon are mentioned in Â§4.2.1. The closest relative of OE is Frisian; also close are the other West Germanic languages, and particularly Dutch, Flemish and Low German. The Scandinavian languages, descended from Old Norse (ON) form another branch of Germanic, North Germanic. This includes the extinct Norn of Shetland, Orkney and Caithness. Of the languages descended from Latin, French is the most important to the history of Scots, especially Anglo-Norman (or Anglo-French as it is termed in DOST entries)[2] in the 12th-14th centuries, and Central French (the emerging Standard French) thereafter. This branch of Indo-European is known as Romance. The term is useful in discussing loans into Scots, as it is not always possible or meaningful to distinguish whether a loan came from Latin or French. The other Indo-European branch with which we shall be concerned is Celtic. There are two sub-divisions: p-Celtic, represented by Modern Welsh, included Pictish and Cumbric (or Britonnic, Brythonic), the language spoken in Britain south of the Forth-Clyde isthmus when the Anglo-Saxons arrived. Q-Celtic[3] is represented by Modern Irish and Scottish Gaelic. The common ancestor of both these modern languages is referred to in etymologies as Old Irish (OIr).

1.1.3 Chronology of Scots and English 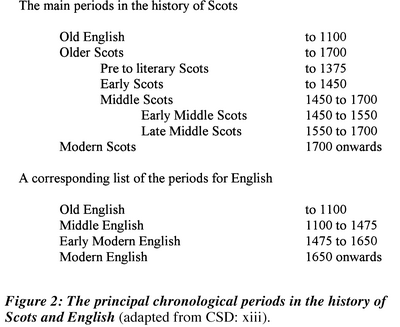 Figure 2 shows the chronological divisions of Scots, with those of English for comparison. In what follows, Middle English (ME), Early Modern English (EModE) and Modern English (ModE) refer to the English of England in specific contrast to Scots.[4]

Scots is sometimes expanded to Lowland Scots because of the confusion in the popular mind with Scottish Gaelic, while the term English is so polysemous that it can hardly be used without qualification. The main variety we are concerned with is Standard English (StE). We often have occasion to compare Scots with StE, both because of the latter’s familiarity to the reader, and because its structures and vocabulary, which have a large overlap with Scots, are already well described in the scholarly literature. This has however led to some neglect in the past of Northern Middle English (nME), which is in many contexts a more appropriate comparator.[5]

It would be anachronistic to use the term StE with reference to the ME period. A variety of terms are used in the literature: Midland and Southern Middle English, East Midland ME, Suddrone (s.v. Southern adj. and n.), London English. Here we use Aitken’s (2002) term pre-Standard English (PreStE).

In writing about the early period, various terms are again used. Historical linguists, who tend to give priority to chronological over regional variation, generally prefer Old English. Historians, taking their cue from (near-)contemporary terminology (in Latin and Gaelic as well as in Old English) tend to use simply English. Place-name scholars, who are more concerned with regional variation, and with the movements of peoples, tend to prefer Anglian, or sometimes, when more precision is required, Old Northumbrian.

[1] I am very grateful to Mrs Chandra Aitken and to Iseabail Macleod for their encouragement to use A. J. Aitken’s work in this way. I would like to express my warm thanks to Professor G.W.S. Barrow, Dr Priscilla Bawcutt, Margaret Dareau, Dr Susanne Kries, Iseabail Macleod, Dr Lilian MacQueen, Professor Michael Montgomery, Dr Christine Robinson and Dr Catherine van Buuren for their valuable comments on earlier drafts. I would also like to thank Dr Carole Hough and Dr Simon Taylor for helpful information. I am indebted also to a large number of other colleagues who have given me the benefit of their views and comments over the years, and who are acknowledged in the original versions of material revised here. I would also like to record my debt to Margaret Dareau for her patience in supplying me with pre-publication drafts of DOST entries, and to Eileen Finlayson for her meticulous copy-editing. Any remaining errors are, of course, my own responsibility.

[2] The term ‘Anglo-French’ more usually refers to the later variety of Central French produced in England, with influence from English.

[3] The contrast between q-Celtic and p-Celtic forms can be illustrated by the Gaelic ceann ‘head’ (with c for earlier q), and the cognate Welsh pen, as in many place-names.

[4] Many writers implicitly or explicitly include Scots under these terms.

[5] Kniesza (1989, 1997) demonstrates how the neglect of nME has led to the misinterpretation of orthographic developments in Scots. The publication of LALME has greatly increased our knowledge of nME, and this is drawn on for instance by Kniesza (1997), King (1997) and Johnston (1997a).

Macafee, Caroline and †Aitken, A. J. (2002) ‘A history of Scots to 1700’ in A Dictionary of the Older Scottish Tongue vol. XII, xxix-clvii. Online https://dsl.ac.uk/about-scots/history-of-scots/