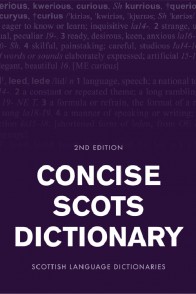 The Concise Scots Dictionary (2nd edition) is the ideal reference work for readers, learners, speakers and students of the Scots language. Updated in 2017 from the first edition in 1985, it is the single most authoritative volume on the history, pronunciation and geographical distribution of Scots words. It is also an invaluable guide for anyone with an interest in the history of Scotland, her people and their way of life.

Drawing on the 22 definitive volumes of the Dictionary of the Older Scottish Tongue (covering the period to 1700) and the Scottish National Dictionary (1700 onwards), with new words gathered from our national reading programme, the Concise Scots Dictionary offers an accessible, one-volume dictionary for all readers and writers.

Reviews of the  first edition:

The second edition has been revised and updated throughout to reflect modern Scots usage, alongside coverage of older Scots. It contains:

Over 1,100 words and usages new for this edition, including:
beamer ‘a blushing face’; pagger ‘a fight’; puggie ‘an ATM, a gambling machine’; sitooterie ‘a conservatory, an outside seating area’

Thousands of idioms, phrases, and proverbs, including:
wee goldie ‘a small measure of whisky’; ya dancer! term of approval; success or triumph; I wouldn’t call the Queen my Auntie ‘we’re as good as the next person’; yer heid’s fu o mince ‘you are talking nonsense’

It has, in addition

The Concise Scots Dictionary is available from the publishers Edinburgh University Press, Amazon and from other booksellers, who may offer it at a lower price.